How is the crowned pulleys affecting conveyor belt?

Crowned conveyor pulleys are designed to assist in tracking belting in conveyor systems. There are several approaches to the design of crowned pulleys, but they all have the same basic design feature: the center of the pulley has a larger diameter than the outer edges of the pulley, thus the "crown".

The rate of crown and total amount of crown in a system is very important and may vary by belting type and manufacturer, so it is wise to contact your belt manufacturer before installing a crown pulley in a belt conveyor system. 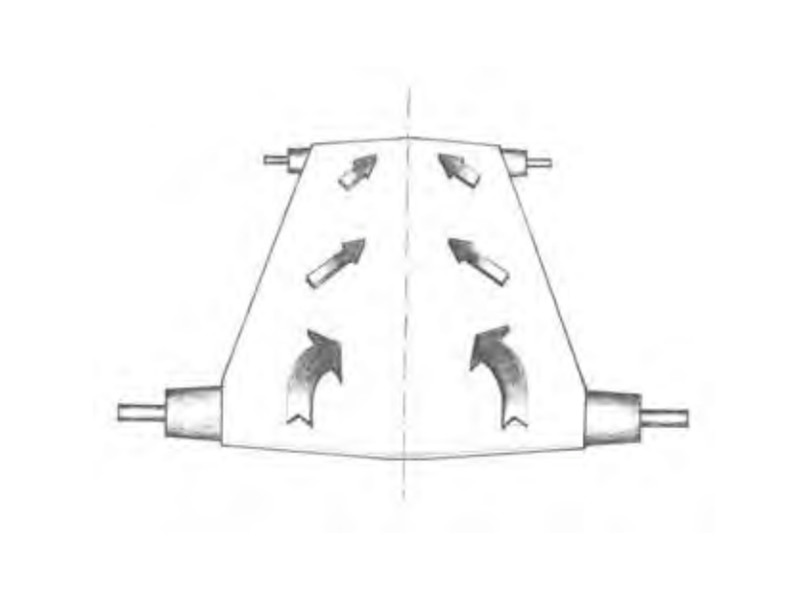 In addition to the tracking effects that occur due to surface contact with the pulley, there are internal tensions in the tensile (warp) members of the belt that create a strong centering force. Belt manufacturers design their carcass material to be equal in tension across the width of the belt.

The crown of the pulley creates an area of higher tension in the center of the belt providing a point of balance in the tensile members across the width of the belt. If the belt wanders to one side or the other of the pulley, this movement creates imbalance in these tensions and stress in the warp yarns. The belt then moves on the pulley to equalize the tensions, relieve the stress and achieve balance once again, hopefully centering the belt in the conveyor system. 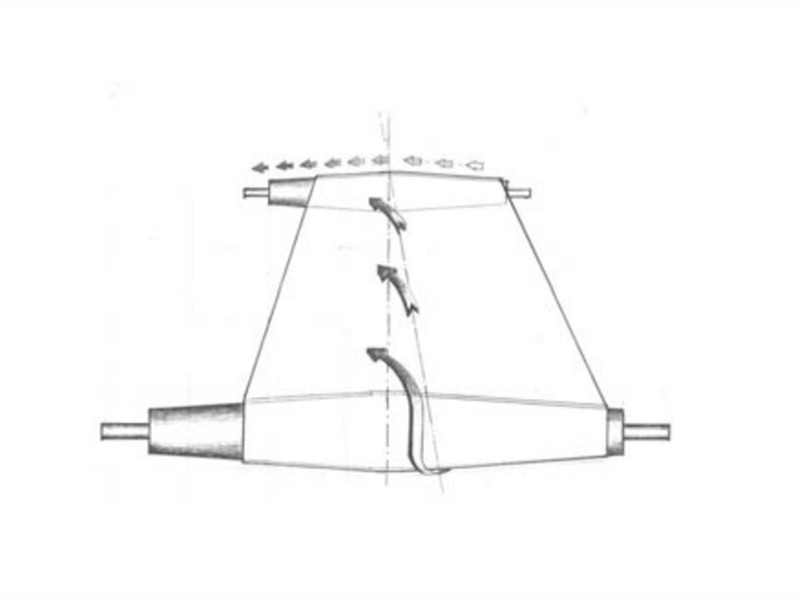 In order to be effective, a crown pulley requires that the conveyor system have enough tension in it to force the belt to conform to the configuration of the pulley. Experience has also shown that a crown is most effective when it has a long unsupported span of belt approaching the pulley (3 ft. plus with little added effect over 10 ft.). That is, the belt must be free of the effects of troughing idlers, conveyor rollers, slider beds, etc. for the crown to offer significant tracking advantages.

It is due to the above requirements that crown pulleys are not recommended for high modulus bulk haulage belting. Steel cord belting requires machined straight-faced pulleys through the entire system. Systems utilizing modern heavy-duty fabric belts should use crown pulleys only in low-tension areas.

However, the full tracking forces that the crown pulley offers do not occur in bulk haulage systems because the tension required to cause the belt to conform to the crown is neither present nor available under normal circumstances.

In addition, the presence of troughing conveyor idlers on the carrying side and rolls on the return side leave very little unsupported belt to be directed by a crowned pulley.

It is not advisable to install a crowned pulley on the high-tension side or drive of a bulk haulage conveyor. At the very least, the crown can cause flex fatigue in the center of the belt with resultant fastener or splice failure. In the extreme, slippage may occur at the drive because the belt does not conform to the crown and the drive torque is being transferred by only a fraction of the pulley face. This generally results in weight being added to the counter weight, increasing the tension in the system adding stress to the belting, splices and conveyor components i.e., bearings, shafts and pulleys.

Package or unit handling conveyors that generally have fewer controlling components in the conveyor system, lend themselves more readily to the tracking capabilities of crowned pulleys.

Driving pulleys in unit handling systems are often cylindrical-conical in shape. They can on occasion also be convex. Both of these pulley profiles are capable of creating sufficient tracking force to guide correctly aligned conveyor belts. 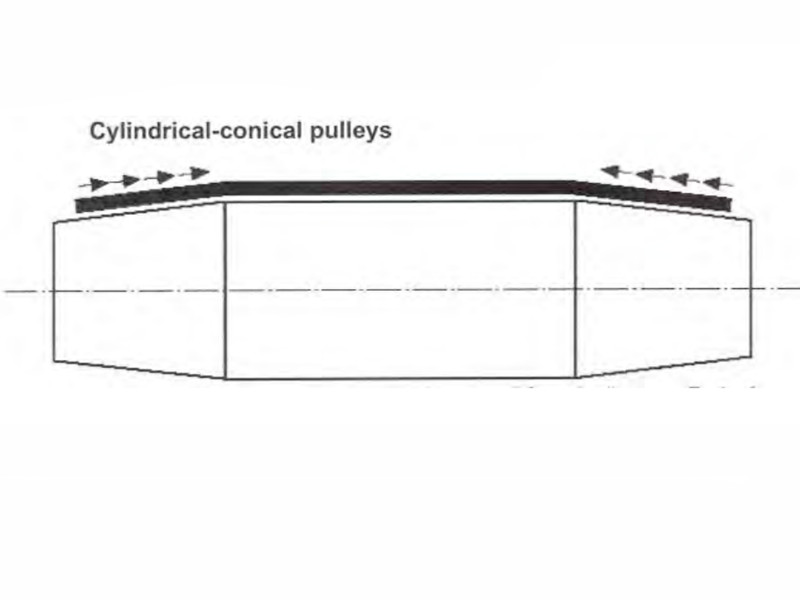 Cylindrical-conical (crowned) formed pulleys operate by the same method as other crowned pulleys. As the belt tries to run to the highest point of the pulley, which is at right angles to the direction of belt travel, it is constantly pulled towards the center of the pulley by the conical side elements. The belt is centered without the need to adjust the axis.

With long conveyors the tracking effect of only one cylindrical-conical pulley, normally the driving pulley, is frequently not sufficient to guide the belt effectively over its entire length. In these cases it is advantageous to give the tail roller a cylindrical conical profile. This issue becomes critical for conveying lengths of 4-5 m and upward.

In reversing conveyor systems, both terminal rollers should be cylindrical-conical if no other measures are taken for belt tracking.

A crowned conveyor pulley should never be run against the coated conveying side of a lightweight belt.

In order to achieve optimum belt tracking without experiencing negative impact on belt operational behavior, belt service life or splice life. Please contact your belt supplier for proper pulley shape ratios. An exaggerated slope on the pulley may result in longitudinal creasing and in extreme cases, lead to belt overlapping. 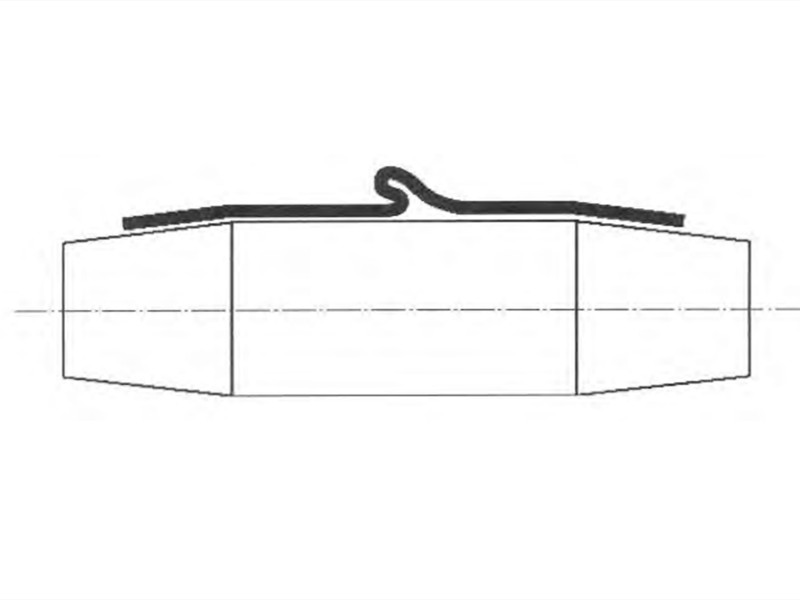 Belts with high transverse rigidity require less slope to the face of the pulley to allow the belt to conform to the crown and influence the tracking of the belt.