Most conveyor belts carrying "freely flowing" materials operate over troughed idlers. The troughing angle of these idlers will usually vary from 20 degrees to 45 degrees and beyond. Obviously, this trough-angle affects the belt by creating a line along which the belt is constantly flexed. The greater the trough angle, the greater the flexing action. When the belt is fully loaded, the portion of the load (X) directly over the idler junction gap forces the belt to flex to a shorter radius. The heavier the load, the smaller the radius through which the belt must flex. Further, at higher troughing angles (like 45 degrees), gravitational force is exerted on the portion of the belt in contact with the wing idler. All these forces are trying to pull the belt down into that idler junction gap. 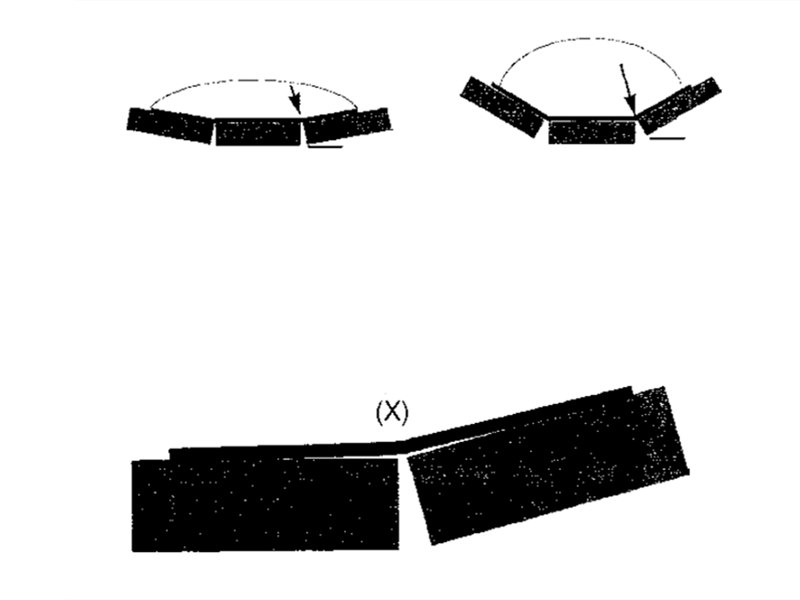 The above illustrations show the necessity of flexibility at different troughing angles. The above illustration demonstrates satisfactory belt design, in that it bridges the gap properly under full load. In the illustration below, the weight of the load has forced the belt tightly into the gap, causing the possibility of premature failure.

This belt characteristic is detailed in the load support or transverse rigidity section of the specification sheet or brochure. The load support number refers to the maximum width possible for a given belt construction at a given troughing angle and a material of a specific density. The TR number is a direct comparison of belts.